Uniformitarian scientists define their stratigraphic column using fossils linked to type sections, with the expectation that the rock record should exhibit evolutionary trends in its strata. However, such is often not the case. A significant portion of the “Tertiary” section exposed along road cuts and in open-pit mines near Americus, Georgia is barren of both body fossils and trace fossils. Hence, there is sparse evidence to support the assertion that the strata reflect millions of years of evolution. Instead, these sediments exhibit features suggesting high-energy deposition. The field data are more amenable to an interpretation within the young-Earth Flood framework.

Modern stratigraphy has codified rules for mapping and age-dating strata in the North American Stratigraphic Code (1983) and the International Stratigraphic Guide (Salvador, 1994). Field geologists apply these rules to determine the proper sequence of strata and their corresponding agedates. The paleontologic contents (e.g., trace and body fossils) of the various rock layers are crucial for defining the stratigraphic position and ages of the rocks, because uniformitarian scientists believe that history can be measured by evolution, documented by fossils contained in the sediments.

Most strata appear to have been deposited in a subaqueous marine settings. Uniformitarians insist that life has been evolving for hundreds of millions of years. That much life over that much time should have left plentiful body and trace fossils throughout the rock record. However, this is not always true. In fact, the vertical rock record for any given location typically contains few fossils, and those are usually concentrated in specific zones or along bedding contacts, and not evenly distributed throughout the column. Uniformitarian scientists do admit the paucity (perceived or otherwise) of paleontological content from sedimentary strata (Lawrence, 1968; Stephens et al., 1973), but explain it away with a variety of ad hoc interpretations in order to defend their assumptions of evolution and deep-time. It is hard to argue support for a model or concept from nonexistent data. To invoke special conditions to explain the loss of data is not good science.

Because uniformitarians emphasize pigeonholing strata within their geologic column (Reed and Froede, 2003; for a discussion of the difference between the conceptual uniformitarian column and the physical rock record), there is little emphasis placed on sedimentary structures and their hydraulic implications. For example, evidence of rapid, high-energy deposition is seldom carried to its logical conclusion by uniformitarians and assigned to local catastrophes. Creationists find sedimentary indicators of hydraulic conditions more relevant.

Southwestern Georgia displays a number of interesting outcrops of the Fall Line Hills District, in the East Gulf Coastal Plain Section (Clark and Zisa, 1976), a wedge of mostly marine sediments that thickens out onto the continental shelf. Its sediments supposedly record eustatic rises and falls between the late Mesozoic and the late Cenozoic eras. Recently, several Tertiary exposures were investigated in the region surrounding Americus, Georgia (Cocker and Costello, 2003). The period of uniformitarian time reflected by these sediments is immense, but details of the section appear to favor a young-earth catastrophic interpretation. 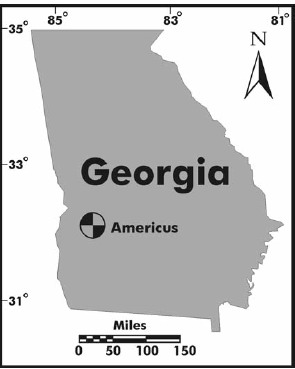 Figure 1 (above). Georgia map showing the study area near Americus. 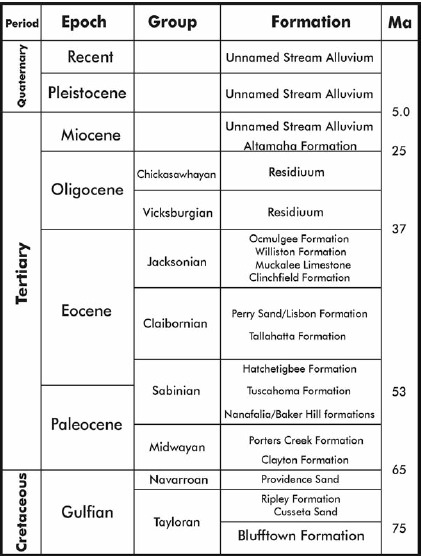 Uniformitarian geologists working the Tertiary stratigraphy around Americus, Georgia, (Figure 1) recognize a number of sedimentary units. While several road cuts were examined, the best exposures were found in open-pit quarries. Numerous stops were visited but few fossils were encountered. Therefore, uniformitarian scientists have been forced to use lithologic properties of the sediments to delineate the strata. As a result, stratigraphic interpretation tends to focus on the color and lithologic changes in the sediments. This procedure has more in common with Walther’s concept of facies than evolutionary stratigraphy. From the uniformitarian perspective, the lack of paleontologic control should prevent accurate stratigraphy. There is no sure means of determining what portion of the original time-rock record has been removed, and what portion remains. Yet, that uncertainty is not reflected in the interpretation (Figure 2). The absence of evidence for life that purportedly spanned 40 million years seems strange, especially considering that most of the exposed strata have been interpreted as deltaic to nearshore marine. Modern examples of this setting teem with creatures, and at least some minimal trace should be expected in the sediments. Rather than a well-ordered evolutionary sequence of fossils, the sediments composing the Tertiary strata contain sedimentary features reflecting high-energy hydraulic conditions.

INTERPRETATION WITHIN A YOUNG-EARTH FLOOD FRAMEWORK

Many creationists recognize the inapplicability of the uniformitarian stratigraphic column to creationist stratigraphy (Froede, 1994, 1995, 1997, 1998; Reed, 1996a, 1996b, 2001; Reed and Froede, 1997, 2002; Reed et al., 1996). For example, the Tertiary strata in the area surrounding Americus are believed to represent a period of time extending from earliest Paleocene (65 million years) to the close of the Miocene (5.3 million years). Interpreting these sediments in light of the Genesis Flood renders the uniformitarian stratigraphy moot (Figure 3). Instead, it is incumbent on creation scientists to examine the physical properties of the sediments in question and reason from effect to hydraulic and environmental cause (Froede, 1995, 1998, Reed and Froede, 2003). A key parameter in this kind of investigation is energy; expressed in terms of hydraulic flow conditions reflected by the sediments. Despite the short time frame constraining creationists, empirical evidence has demonstrated that thick accumulations of even thinly laminated sediments can accumulate in a matter of days (Austin, 1991). 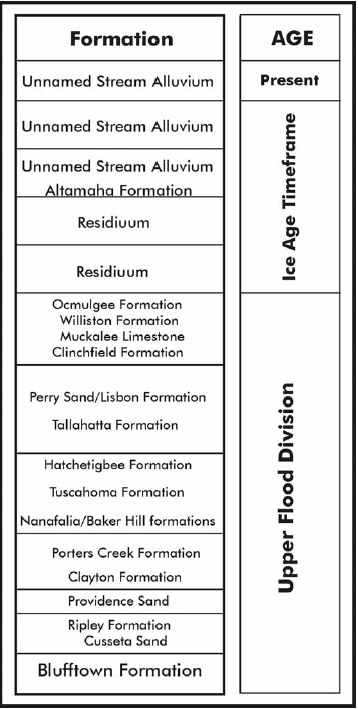 Figure 3. Conceptual column of southwest Georgia within the framework of the Genesis Flood.

The various exposures of strata in the region near Americus present excellent locations to examine the succession of sediments. Many of the lithologic layers contain sedimentary features and structures indicative of erosion, transport, and deposition on a large-scale. Figure 4 shows coarse-grained and crudely cross-bedded sandstone containing abundant marble- to pea-size kaolin clasts in the Nanafalia Formation. The kaolin clasts reflect a high-energy erosional setting; it requires significant current energy to rip up clay, much greater than that necessary to erode and transport quartz sand. Figure 5 shows a roadside exposure of a channel later filled with the Altamaha Formation. The total uniformitarian duration of time between the channel filling Altamaha Formation and the underlying Providence Formation is 40 million years, but there is no paleontological evidence to support that conclusion. Their interpretation is based on color and lithologic changes in the sediment; parameters that are easily independent of time. 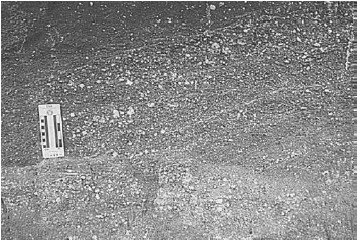 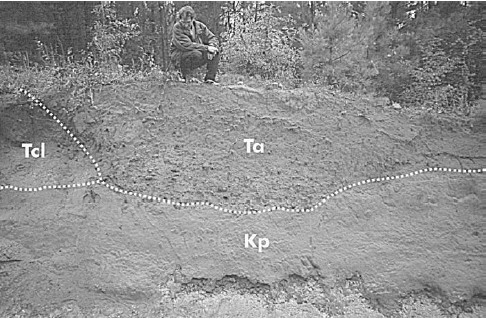 Figure 6 shows the northwest wall of the Guy-Pierce Mine. Uniformitarian scientists believe that this 30-foot high exposure represents approximately 14 million years. Changes in lithology are interpreted to reflect different stratigraphic units and their corresponding ages, but once again none of the strata contain fossils. Sedimentary structures suggesting high-energy deposition also explain the lack of fossils, and would also indicate a short interval of time; conditions consistent with the young-earth/Flood framework. Figure 7 shows an exposed wall in the Fowler Mine. Uniformitarian scientists propose that this exposed section represents approximately 35 million years, but despite the supposed marginal marine setting, fossil evidence remains absent. As with other locales, the strata contain abundant evidence of high-energy deposition. 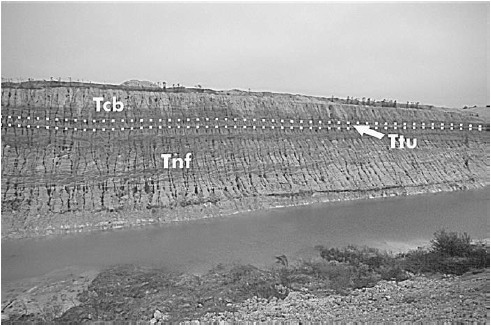 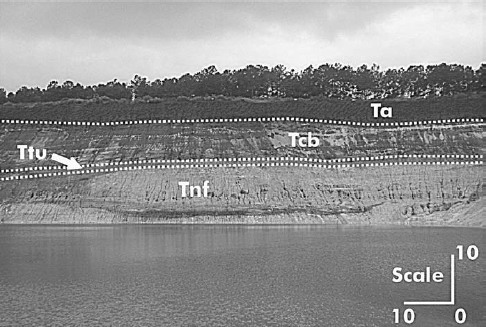 The strata in the Americus area present, then, a dual problem for uniformitarians. There is no fossil evidence to support their stratigraphic division of the rock record, and sedimentary features indicate energetic currents that would have deposited the sediments within a short period of time. Their reliance on lithology and color is evidence enough of their plight. Such changes are easily explained in terms of variations in the sediment source and the current energy; neither of which require significant amounts of time. It requires great faith to hang a multimillion-year history upon lithologic properties such as the color of a layer of sediment, especially in the absence of any significant trace or body fossil information. I interpret the strata throughout the study area as reflecting high-energy geologic conditions extending from the close of the Flood, through the Ice Age Timeframe, and into our Present Age Timeframe (see Froede 1995, 1998). It is possible that fossils are absent because the energetic paleoenvironment was not conducive to the establishment of any marginal-marine habitats during so short a period of time. Another possible creationist interpretation might suggest that no hard-bodied invertebrate creatures lived in the area from which these sediments were originally derived (i.e., no formerly living creatures were removed from the eroded sediment source areas, transported, and buried with these sediments). However, this idea does not address the occasional occurrence of trace fossils in the sediments. Perhaps a more reasonable interpretation based on the stratigraphic setting and lithologic content would be that the near absence of any trace fossils and total lack of any body fossils reflect the short time available to marine creatures to establish themselves in a dynamic erosional and depositional setting.

The purported passage of millions of years of Earth history should be represented by more than color or lithologic changes in sedimentary strata. Consistent with their own framework uniformitarians should be forced to provide fossil evidence of deep time or admit their ignorance when such evidence is absent. They should also admit the incongruity of finding few fossils in a marginal marine setting that supposedly existed for many millions of years. Since fossils are absent, the interpretation of the “Tertiary” strata near Americus, Georgia, must rest upon the sedimentary features which reflect the paleohydraulic conditions of deposition. Since those indicate high energy and imply short timeframes for deposition, the young-Earth Flood framework provides a superior model for interpreting these strata. The size and extent of the sedimentary features and lithologic changes, indicate that these strata formed by aqueous deposition in a setting with larger scale and higher energy processes than those proposed by uniformitarians.

I thank Emmett Williams, Jerry Akridge, and John Reed for their very helpful comments. As always, I thank my wife Susan for allowing me the time and opportunity to research and write this article for the glory of our Lord Jesus Christ. Any mistakes that may remain are my own. Glory to God in the highest! (Prov. 3:5–6).