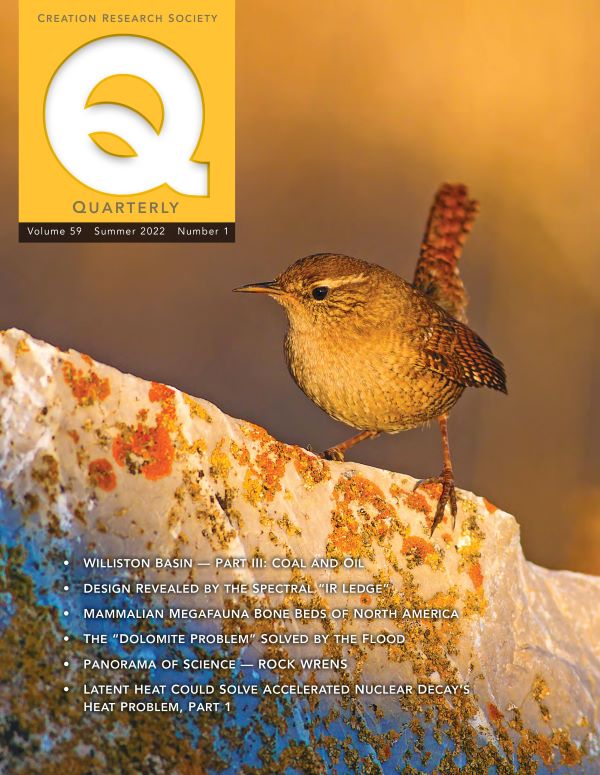 Important mammalian megafauna bone beds are located in Nebraska's Agate Fossil Beds National Monument (Agate Fossil Beds) and Cita Canyon, Texas. Similarities between these two sites are the predominance of broken and disarticulated skeletons, evidence of rapid burial, and similar sedimentary environments. The two bone beds discussed herein are interpreted as post-Flood because they appear to have been deposited in rocks that were carved into older receding phase layers. A hill about 1.5 miles (3 km) east of and at about the same stratigraphic level as the Agate Fossil Beds has yielded over 100 mummified carcasses of Stenomylus (gazelle-like camelids), apparently buried and suffocated by a sand/dust storm. Based on the site description, water did not create this deposit or alter it, indicating that the Stenomylus camelids perished after the Flood.

Remote sensing is a field designed to enable people to look beyond the range of human vision. Whether it is over the horizon or in a spectral range outside our perception, we search for information about our environment. Remote sensing data is enormously powerful and gives humans more data than can be discriminated directly via our senses. The extraction and analysis of this data reveals important, valuable information. It also implies specific design characteristics that only a designer could invoke. One of the incredible phenomena found through remote sensing is the illumination of the “IR Ledge” in vegetation. The IR Ledge or “red edge” is an essential and dramatic spectral feature found in remote sensing and refers to the region of dramatic change in reflectance of vegetation in the near infrared (NIR) range of the electromagnetic spectrum. This dramatic variation in reflectance facilitates photosynthesis and protects vegetation in the higher energy, longer wavelength region of the electromagnetic spectrum. This article contends that this reflectance phenomenon combined with the unique and precisely tuned blackbody radiation profile of the Sun centered on the visual spectrum displays characteristics that transcend coincidence, meets the definition of Complex Specified Information, and infers causation and, therefore, design.

The “Dolomite Problem” Solved by the Flood

Dolomite conservatively makes up 10% of all sedimentary rocks and is mostly stoichiometric and ordered, mainly older than the Cenozoic. It can be thick and widespread, especially in the Precambrian and Paleozoic. Although dolomite is forming today, the great mystery is that it is of small scale and not stoichiometric and ordered. Dolomite today is likely formed by the aid of microorganisms that act as catalysts to overcome strong kinetic effects. The “dolomite problem” has been a uniformitarian mystery for over 200 years. Many uniformitarian scientists predominantly believe in replacement of limestone and not the primary precipitation of dolomite. However, replacement, or dolomitization, required tremendous fluid flow from a ‘pumping mechanism’ with an unlimited amount of Mg available. Evidence does exist for replacement, mainly from hydrothermal fluids associated with faults, but the fluid has to have been very hot. Numerous experiments studying the origin of dolomite use temperatures over 100°C for primary precipitation. In contrast, the short time scale of the Flood would require that most dolomite is primary formed from widespread hot water, especially very early in the Flood when the Precambrian and Paleozoic rocks were being deposited, mostly in basins and rifts. In addition, dolomites may be helpful as a criterion for determining the pre-Flood/Flood boundary.

A phase change for the condensed matter comprising large nuclei is proposed as a heat sink during an episode of accelerated nuclear decay, being particularly relevant to the formation of radiohalos. The proposed nuclear phase change would occur in 206Pb nuclei, being the final stable progeny in the 238U decay chain. With each cascade of decays, the latent heat for this presumed first order phase transition would be taken from (via heat transfer, generically invoked), and thereby continuously cool, the radio-center's immediate environment wherein the thermal energy is deposited. Arguing by analogy with atomic/molecular systems, the plausibility of providing sufficient cooling (absorbing enough energy) by a phase change is explored. The lower entropy phase for large, unstable nuclei during accelerated decay might consist of alpha clusters as compared with primarily nucleon pairings for the normal phase. The nuclear phase change would occur with/at the switch from unstable parent isotope to stable daughter in accordance with the dependence of a hypothetical nuclear phase diagram on the decreased strength of the nuclear force (a shallower nuclear potential) for unstable nuclei characterizing an episode of accelerated decay as compared with normalcy, as will be explained in Part 2.

Petrified Ideas of the Williston BasinPart III: Coal and Oil

The Williston Basin of central North America contains prodigious quantities of coal and oil. Could the antediluvian biosphere have provided this carbon mass, or did it require many millions of years to accumulate? In this concluding part, we focus on fossil fuels. As we have seen many times in many places, what appear to be strong arguments against the Biblical view of Earth history turn out to be strong arguments against uniformitarianism.