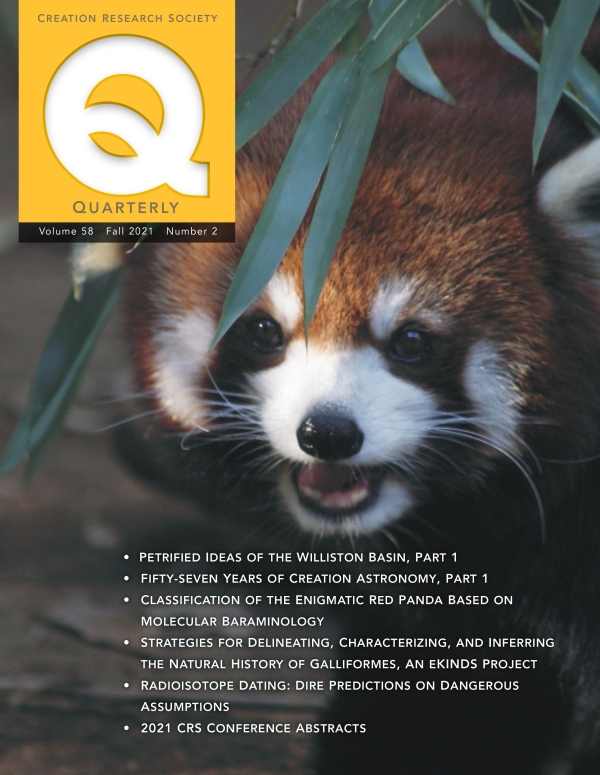 Petrified Ideas of the Williston Basin—Part I: Geologic Setting

The Williston Basin of central North America is famous for its “nearly complete geologic column,” and its huge fossil fuel resources. As an incratonic basin with few relatively unconformities and representatives of each of the purported geologic time periods, it has been a poster child for deep time. However, many features appear at variance with uniformitarianism and an ancient Earth. These include the thick sedimentary sequence, gravel-capped planation surfaces, petrified wood and other fossils, and fossil fuels. The geologic setting is presented, showing weaknesses and strengths in the diluvial hypothesis of the basin’s origin and history. The mental straitjacket of uniformitarianism results in petrified ideas that hinder understanding of likely geologic processes. This is particularly demonstrated by extensive planation surfaces with gravel veneers of largely exotic lithologies, which are readily explained by diluvial processes but not by uniformitarianism.

Fifty-Seven Years of Creation Astronomy—Part I: A Survey

Since its inception in 1964, CRSQ (along with other creation science journals) has published a significant amount of work in astronomy, with the number of articles in this field comparable to that in paleontology. In general, the fraction of articles dedicated to astronomy has fluctuated between 5 and 20%, even as total creationary output has roughly tripled since the 1960s. Contributors to creation astronomy literature include several holding Ph.D.s in astronomy or physics; many, however, do not seem to hold an earned science doctorate. This state of affairs calls, on the one hand, for continued contribution by creationists at all levels of training and, on the other, for intentional acquisition of astronomy degrees by young creationists.

The red panda is a curiosity of biological classification. Taxonomists have come to different conclusions on its placement depending on which characteristics are considered. It was once considered closely related to bears (ursids), other times to raccoons (procyonids), or animals such as skunks (mephitids), badgers, otters, or martens (mustelids). Perhaps the red panda belongs to its own group.

Since the whole genome sequence was available for this organism, the Whole Genome k-mer Signature algorithm was used to classify the red panda. Mitochondrial DNA and cytochrome-b protein sequence similarity was also measured to help determine the baraminic status of the red panda.

Based on these results, it is likely that the red panda belongs to the mustelid holobaramin, although further baraminology studies are warranted, both morphological and molecular.

One foundational goal of baraminology, or the study of created kinds, is to identify which creatures known today are related in that they belong to the same created kind (baramin). From this foundation, baraminology provides a robust framework for better understanding biology and the natural history of life. Once a baramin is delineated with reasonable certainty, it is important to evaluate the unity and diversity within the group. This allows well-reasoned inferences on which traits can undergo change, and which are largely fixed. In part I of this series, we examined the avian order Galliformes, or chicken-like birds. Here we evaluate each of the five galliform families and note some of the morphological and behavioral diversity in this group. This will lay a foundation for further study regarding the natural history of this baramin, and may help to uncover mechanisms involved in generating this diversity (e.g., created heterozygosity, genetic changes, migration, hybridization, etc.).

Earth’s surface was drastically altered by a global cataclysm in the recent past – one that was recorded in the sixth to ninth chapters of Genesis. Artifacts from the Genesis Flood are readily seen across Earth’s surface, testifying to the ramifications of such a widespread disturbance in geohistory. Though an understanding of the Genesis Flood comprised the basis for early geologic thought, eighteenth-century geologists abandoned of Genesis in favor of the assumption that geologic processes occurred gradually without any supernatural intervention. Based merely on a predisposed dismissal of biblical history, this paradigm shift led to a radically distinct geology. What was first viewed as evidence of past catastrophism was re-envisioned as the product of gradual geologic processes over untold eons.

Since the eighteenth century, naturalistic geologists have attempted to quantify this vast chasm of ‘deep time’, but no numerical method was found adequate until radioisotope dating schemes were introduced in the early twentieth century. Over the succeeding decades, radioisotope dating has bolstered the deep time geologic paradigm and evolutionary naturalism. Notwithstanding the use of radioisotope dating, a return to the understanding of the Genesis Flood and its implications for interpreting geohistory has led to a growing awareness of the flaws plaguing radiometric dating. The assumptions undergirding radioisotope dating methods has repeatedly produced faulty results in the present, casting doubt on the extrapolation of radiometric schemes into the unobserved past. Diluvial geologists and others have often revealed these flawed presuppositions, but recently world-renowned scientists have admitted to the assumptions inherent in radioisotope dating.