eKINDS – Examination of Kinds in Natural Diversification and Speciation

The wide variety of dog breeds provides an excellent example of the genetic diversity God gave to the original created “kinds.” (Wikipedia pics from https://en.wikipedia.org/wiki/Dog)

Many people are fascinated with the amazing diversity of life that God has place on earth. People frequently ask questions, such as How are different animals related? and How did all this variety arise?

The secular world provides naturalistic answers to these questions. These answers begin with rejecting the Bible’s history of life, and postulating that all life arose by natural processes from a single common ancestor. When examined in detail, however, there are enormous problems with demonstrating the universal ancestry of all life. In contrast, biblical creation holds that God created different groups of animals and plants, which were called “kinds.” He placed distinct divisions between these different groups (1 Cor. 15:39) and instructed them to reproduce “according to their kind” (Genesis 1). Thus, life does not share a universal common ancestry. God further instructed the created kinds “to fill the earth” (Genesis 1), indicating He gave life the ability to change and adapt to a wide variety of ecosystems. Critics of biblical creation often claim that we believe in “hyper-evolution” or “evolution on steroids.” The implication is that we cannot account for the extensive and rapid diversity of life that has arisen since the different “kinds” of animals exited the Ark around 4500 years ago.

The CRS eKINDs research initiative was developed to serve as a catalyst, promoting research that addresses numerous questions pertaining to the post-Flood repopulation of the earth. These questions can be grouped into three general categories: 1) which organisms today are descended from the same created kind?, 2) what mechanisms are responsible for the astounding diversity seen within created kinds?, and 3) can we trace the natural history of various animal kinds as they dispersed from the Ark to repopulate the earth?

There have been some initial attempts to estimate the number and biological distinctions of the created kinds. This research shows that more work needs to be done. The increasing volume of molecular data (i.e., DNA and protein sequence data) has the potential to augment previous studies, perhaps allowing for a clearer delineation of created kinds. In view of this, the eKINDS project is developing a new statistical tool that seeks to group species based on molecular similarities. A more detailed explanation of the methodology, with application to fungi, appears in a recent Creation Research Society Quarterly (O’Micks, 2017).

The secular story attempts to account for life’s diversity using random mutation and natural selection. In a biblical model, life was originally created with the potential for diversity. God clearly designed life to be able to adapt to different environments and settings, enabling life to “fill the earth.” Such adaptation can involve a number of genetic mechanisms, including directed mutation, gene conversion, and epigenetics. As part of the eKINDS project, we hope to investigate these areas in more detail.

Paradise kingfishers inspired Ernst Mayr to propose the founder effect decades ago. As part of the eKINDS project, this group of birds has also been examined in detail (Lightner and Ahlquist 2017). One conclusion from the eKINDS study is that evolutionists incorrectly assume animals do not choose environments where they are naturally best suited. Real world observation indicates otherwise. Thus, animals selecting a suitable environment (a reflection of the adaptive skills that God gave them), which at times may involve the founder effect, can increase the prevalence of adaptive traits in a way that evolutionists might attribute to natural selection. 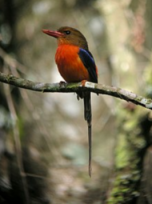 In addition, morphological, behavioral, and molecular data of kingfishers may help us understand relationships within this group. This information will help in development of a preliminary hypotheses that accounts for the dispersal and adaptive radiation of this kind after the Flood. A similar study in landfowl (Galliformes) has begun, as well. eKINDS Publications Lightner, J.K. and J. Ahlquist. 2017. Founder events: Foundational in rapid post-Flood diversification. Creation Research Society Quarterly 53, no. 3:217-224. O’Micks, J. 2017. Baraminology classification based on gene content similarity measurement. Creation Research Society Quarterly 54, no. 1:27-37.