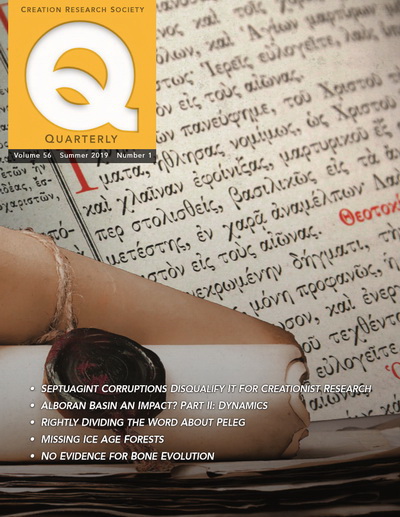 Rightly “Dividing” the Word about Peleg:
Was Earth’s unusual “division”
during Peleg’s lifetime a
linguistic event or a geological event?

The Noah-to-Abraham portion of the Messianic lineage includes a man named “Peleg,” whom Scripture reports was so named because “in his days was the earth divided” (Genesis 10:25). Some have suggested that Earth was “divided,” during Peleg’s lifetime, in the sense that humanity was divided linguistically as a result of the Tower of Babel event. Others have suggested that the term “divided” (in Genesis 10:25) refers to the splitting apart of the continents, assuming that continental splittings occurred after the Flood. However, neither of these views are based upon a comprehensive philological investigation of the Hebrew vocabulary involved, which suggests that post-Flood weather patterns were then producing extraordinary riverization, with results so geomorphologically dramatic that the genealogy of Genesis 10 was worth interrupting to mention this side-note. Besides addressing the question of what Peleg’s name means, this study illustrates how Hebrew philology studies can be used, in some contexts, to clarify details of Genesis history.

No Evidence for Bone Evolution

The evidence for bone evolution from some nonbone substance was reviewed, concluding that all of the bone evolution proposals have been falsified. In the words of one researcher, bone magically appeared in life and left no trace of its evolution, even though bone and teeth are one of the materials that have the best record of preservation of all biomaterial in the fossil record. Bone is one of the most complex organs in the body and, if it evolved, there would be clear evidence of its evolution. The evolution theories proposed to explain bone evolution were also examined in some detail, showing they were all very problematic.

Modern models of the Alboran Sea Basin all assume standard plate tectonics. The area lies at the boundary between the African and European plates, converging since the Cretaceous. This boundary is not clearly seen; it is suggested that northwest Africa is being subducted beneath the Eurasian plate. All of these models have problems, so a Flood scenario is presented that proposes that the Alboran Sea Basin and its surrounding mountains are the result of an impact, based on our knowledge of the area and impact dynamics.

There has recently been an interest in the creation science community to promote what is today called the Septuagint (LXX), a controversial Greek translation of the Old Testament that also contains the noncanonical Apocrypha. The recent reason for doing so, it appears, is that the LXX can be used as a justification for an expanded biblical history, both before and after the Flood. Ironically, the LXX reports erroneous chronology data that, if true, would require Methuselah to have survived the Flood (in addition to the 8 historical survivors) by about 14 years—and no LXX advocate has offered a forensically reliable remedy to this error. Meanwhile, as complicated chronological/genealogical arguments have waged back and forth between proponents and opponents, the “elephant in the room” is the pervasive textual corruption that clearly exists in what is today called the LXX, which renders it a forensically unreliable text-source. Contrary to claims that that the LXX closely follows the Masoretic Hebrew outside of a few chronological differences, the LXX (in its variant forms) often differs significantly from the providentially preserved Hebrew text of the Old Testament. Our analysis of key Messianic prophecies in the LXX, compared to the Hebrew, reveals a disturbing trend of textual corruption. This preliminary study will show that five pivotal Old Testament Messianic prophecies have been severely altered in the LXX, so as to remove their otherwise clear prophetic connection to the New Testament mission and divinity of the Lord Jesus Christ. We propose that these LXX corruptions were introduced during the late 1st Century AD (at the earliest), with further corruptions being added in later centuries, most likely by Messiah-rejecting Jews and/or by Scripture-altering pseudo-Christian Alexandrian scribes.

Uniformitarian scientists have long been puzzled by an apparent dearth of trees, even in unglaciated areas, during the supposed 2.6 million years of the Pleistocene Epoch. Thick forests can take centuries to grow, and creation scientists estimate that the most likely duration of the post-Flood Ice Age was 700 years. Since the Genesis Flood killed every living tree in the pre-Flood world, and since thick forests normally take centuries to grow, this general absence of Ice Age trees could be evidence for the Creation Ice Age model. On the other hand, it may also present a challenge to the Creation model, as abundant precipitation early in the Ice Age would seem to favor rapid tree growth. Evidence for an absence of mature Ice Age forests seems especially strong in Europe and North America.