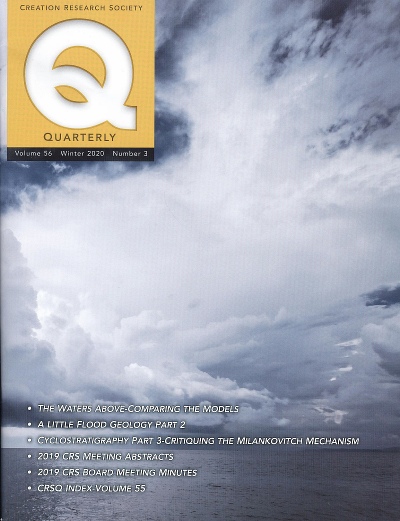 The Waters Above—
A Comparison of Three Models

In Genesis 1:6–8 the Bible reveals to us that, on Day 2 of Creation, God made an expanse, called “Heaven” and separated the waters below the expanse from the waters above it. The nature and location of these “waters above” have been debated for some time. Further complicating the puzzle, the Bible speaks of three heavens. The first step is to define these “heavens.” Then we might know where the waters were located. Three models will be compared—the Vapor Canopy Model, the White Hole Theory model, and the Hartnett-Carmeli model. Each one locates the waters above differently—above the atmosphere, around the universe, and around the outer reaches of the solar system respectively. The strengths and weaknesses of each are compared in an attempt to come closer to the truth.

Cyclostratigraphy claims to rely on an accurate astronomical time scale and further on a clear imprint it supposedly makes on the sedimentary record. Grounded upon the Milankovitch theory, geologists first sought to apply this method to develop a timescale for Quaternary glacial/interglacial oscillations. But there are several glaring unresolved problems with this approach. Although solar radiation measurements at high latitude appear to lend support to the mechanism, the data are carefully selected, typically restricted to the summer solstice or the months of June or July. By contrast, the larger dataset for the warm half-year for the whole hemisphere shows the Milankovitch effect is very small. Moreover, geologists believe glacial episodes over the past 900,000 years have been controlled by the 100,000-year eccentricity cycle, but that cycle has a very small effect relative to other cycles. Further, glacial cycles should be out of phase between the hemispheres, yet they are not. Finally, proponents rely on correlation between Milankovitch cycles and deep-sea cores, but these appear to be the result of circular reasoning and the reinforcement syndrome.

As argued in Part I of this series, floods are a key category of geologic processes. Common floods make important analogues to megafloods, including the Deluge of Noah’s day. This paper provides some examples of geologic work by floods and related processes in Central Montana as experienced by the author, and also provides ideas about how these may apply to the study of earth history.

The Waters Above- A Comparison of Three Models Cyclostratigraphy A Little Flood Geology Part II: Examples from Central Montana