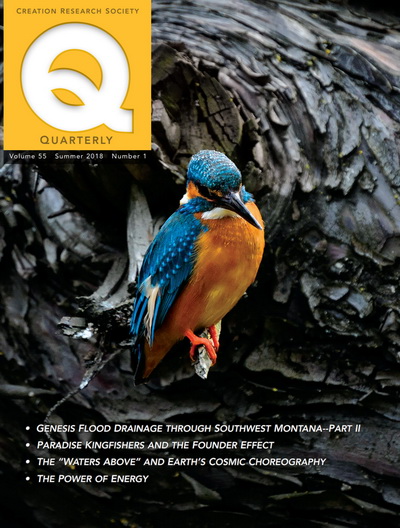 by Jon Ahlquist and Jean Lightner

The Bible provides a robust foundation for understanding the natural history of life on Earth. After Creation and again after the Flood, terrestrial animal life reproduced to fill the earth. This involved numerous founding events as new habitats were invaded and new ecosystems formed. The paradise kingfishers of New Guinea display an interesting pattern of distribution, which inspired Ernst Mayr to propose the founder principle. A previous paper discussed the founder effect in more detail; however, much work remains to be done to see what role it has played in diversification and speciation within created kinds. Here, kingfishers are examined in more detail, with a special emphasis on the paradise kingfishers (Tanysiptera species) of Australasia. A summary of what is known is followed by an outline of research that desperately needs to be done to better understand how various factors, including founding events, have influenced the impressive adaptive radiations within the kingfisher kind.

Do Isaiah 40:22 and Psalm 29:10 Speak to Cosmological Realities? Considering the “Waters Above” and Earth’s Cosmic Choreography

In a recent CRSQ article, Hebert (2017) analyzed some biblical passages that have cosmological relevance yet appear to be overlooked by many commentators. Hebert suggested that the Bible may teach that heaven, the abode of God, is located directly on the other side (i.e., outside) of the waters God placed above the expanse (Hebrew raqîa‘). In other words, the “waters above” (Genesis 1:6–8) are acting as a boundary or interface between our universe and heaven itself. He also suggested that God’s throne is located above these waters but in a northerly direction, most likely the direction of the north ecliptic pole. Here we examine two additional passages of Scripture that may provide additional support for these ideas, Isaiah 40:22 and Psalm 29:10. Although these passages may be familiar to many biblical creationists, we suggest more detailed understandings of these passages, with analysis that should be informative to students of cosmology, as well as exciting to students of Scripture. In particular, a philological study of Isaiah 40:22’s Hebrew noun chûg (translated “circle” in KJV) indicates that Earth moves in a choreographed circuit, as opposed to Isaiah 40:22 being a proof-text for Earth’s roundness.

The Power of Energy

This title may at first disturb the disciplined scientific mind because of its apparent dimensional inconsistency. As a matter of fact, for our present purposes, it might just as well be titled “The Energy of Power.” The point to be made, in either case, is that energy, as a concept, is tremendously powerful, both in the solution of technical problems and in its implications with reference to the true understanding of nature and the universe. And this is true whether we are speaking technically of energy or its time-derivative, power. Neither is an actual physical substance, of course, but each is an extremely useful and significant concept, without which the great contributions of modern science could hardly have been possible.